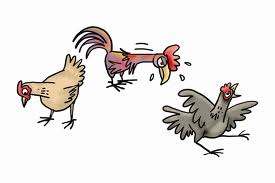 (Spoiler alert…if you stopped by hoping to catch some videos of chicken sex…a) you need a new hobby, b) you are dark and twisted in a different way than I am and c) eewwww)

There’s a reason I don’t write fiction…I couldn’t make this stuff up.

Princess is a character in my world who exists solely on privilege and entitlement. I used to think that she was completely out of touch with reality but I’ve come to the conclusion that she’s merely out of touch with my reality and that’s enough to annoy the crap out of me. I will give her credit for having achieved a level of oblivion that is nothing short of mind-boggling. She was talking to me, as she tends to do …unaware that I was plotting her untimely demise. She’d just marched in announcing that she’d done an hour and half of cardio the night before …then asked me if I knew how long an hour and a half of cardio takes …

I’m going to go with an hour and a half…oh, wait a minute…nope, make that 90 minutes.

Go ahead, ask me something else…I’m on a roll

She makes the natural segue to extolling the virtues of honey…hey, I’m just telling the story the way it happened. I thought I could cut the conversation short by telling her I was not a fan of bee barf. In retrospect, that was a mistake. Her response…“that’s like when I eat eggs and I stop and realize that I’m eating chicken abortions”.

In my shaky defense, I rarely bother trying to realign her royal highness’ thought processes with reality, but every once in a great while I fall prey to my own curiosity. What’s more painful – listening to her talk or attempting to enlighten her? It’s usually a little from column ‘a’, a little from column ‘b’.

Princess: “If I didn’t eat them, they would have become chickens, so they are chicken abortions.”

Me: (Pretty sure this is about to get much worse. But, I gotta take a shot). “That’s not quite how it works. Market eggs are unfertilized eggs; at no point do they have the potential to turn into chickens.”

Me: (In my best Lewis Black) – “ROOSTERS, ROOSTERS…ROOSTERS FERTILIZE EGGS!!!!”

Princess: (clearly confused) …”but how do they get the stuff through the shells?”

There’s not a judge in the world who would convict me at this point. I’m presenting my defense in my head at this very moment…”your honor, I had to put her out of my misery”…charges dropped, case dismissed.

Me: “Sex…chickens have sex. And before you ask the next question…they have sex before the egg is laid…thus, a fertilized egg”. There you have it, chicken sex.

Long pause while she sorts out this new information, the pieces are beginning to fall into place. Synapses are firing…we are almost there

Princess: “that must be noisy…”

And we have arrived. This is as good as it’s going to get.

I kid you not, that’s her reaction. Apparently, I’ve put her mind at ease; she can now eat eggs without being haunted by the souls of unborn chickens. Armed with her newly acquired knowledge about poultry reproduction, she leaves…and for that, I am eternally grateful.

Unfortunately, she comes back later that same day. She breezes in complaining that “Romeo got penis juice on my last pair of lululemons”…oh, no …I’ve already explained poultry fornication today, I’m not getting sucked back into the vortex.

Romeo is an English Bulldog…not so much a pet as a furry little hostage who snorts and drools. I suspect Stockholm Syndrome is all that keeps him from escaping…well that and really short legs. 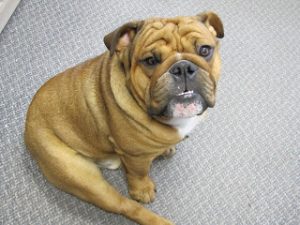 (note: I dedicate this post to Kilroy who has been waiting patiently for me to unleash some wenchery on her majesty).