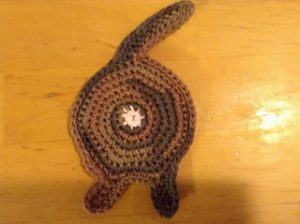 After the whole twiddle muff incident, things got worse. This will make marginally more sense if you’ve read the “Words That Make Me Giggle” post…but not much more.

Knitting or crocheting sounds like such an innocent past time. Not so fast – who knew the yarn arts had a dark side, a “mature content” section?  Turns out the yarn folks can be an odd bunch.

Do you know there’s such a thing as vaginal knitting? I’m not making this up… feel free to google it but, be warned, that’s a bell you cannot unring. I’m not posting a picture, it’s too strange. That is an unsanitary place to tuck your yarn and no one, I repeat no one is ever going to want to wear that scarf. There are all kinds of neat little gadgets you can buy to hold your yarn that are, how shall I put this…less personal and moist.

You can crochet a bra but I think it says a lot about the “yarn artist” involved that a) the bra has nipples on the outside of the cups (??) and b) she is pictured nursing a plush monkey. I’m going to leave that right there. There’s also something called a “backdoor monkey” that in no way specifies what the backdoor is for and I never want to know what you do with your monkey.

I may have led a sheltered life but I don’t understand all the knit sex toys, seem impractical at best. A French tickler, a dildo. A real statement piece – a vagina pad holder. A crocheted pouch that looks like a vagina to tuck your feminine pads into…does not indicate whether the pads are also crocheted but I wouldn’t be surprised at this point. I’m questioning whether some of the people who’ve taken a shot at creating a knit or crochet vagina have ever actually seen one ‘cause they don’t look like that…or at least they shouldn’t. Technically the exterior structure of the female anatomy is the vulva and the vagina is the internal structure…but vagina is the standard reference so I’m using it.

You can knit/crochet a reusable tampon but you really, really shouldn’t. I’m not sure what kind of 3rd world hell inspired that particular idea but of all the things I’m willing to reduce/reuse/recycle, I’ll treat myself to fresh, shiny new feminine products every single time. Call me crazy. Not to be outdone, there are crocheted feminine pads, described as both practical and reusable, there’s even a winged version. Nope. Another suggested use…unique coasters. If I’m ever at your house and you slip a crocheted sanitary pad under my drink, I’m leaving. I’ll mock you first, but still leaving.

I thought the crocheted tampon was the pinnacle of weird shit you can knit…but nope, they one upped that real quick. You can knit a placenta, complete with umbilical cord. You can but why would you, can someone please explain to me at what point in your life you need a knit placenta. Maybe you can tuck it beside the ugly ass vagina cushion from the “Words That Make Me Giggle post“. But again, and I cannot stress this enough…why? If you’ve got some time to kill, how about a uterus, complete with fallopian tubes and ovaries. 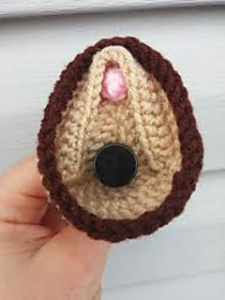 A knit condom…as long as you are aware that it is not an effective method of birth control ‘cause if you think knitting a condom is a good idea, you shouldn’t ought to reproduce…ever.

One creative stitcher whipped up what might be considered a bust of a vulva…at least I think that’s what she claims it is. It looks like a sea creature, a big ass barnacle. The kicker…she gave it a g spot. Reread that sentence…she gave it a g spot so that it is, in her words “anatomically accurate if you are adventurous enough to explore around the inside”. It’s pictured with a bottle beside it “for scale” – so happens it’s a bottle of personal lube. Well, there’s a Friday night you’ll not soon forget. 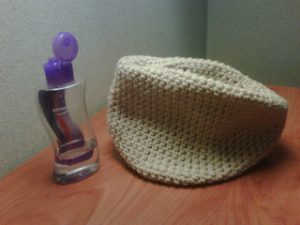 It just crossed the line into something really strange and twisted…I’m crowning a new winner in the category of odd stuff you can knit (or crochet, equal opportunity yarn shenanigans)…a fetus in a jar. Yes, you can create your own fetus in a jar…and for one twisted stitcher, that wasn’t pushing the envelope quite far enough…she gave her fetus a trucker hat and a cigarette and named him Cletus. He does look decidedly cooler than the other fetuses, just saying. One misguided soul posted a pic of her yarn fetus hanging out of her crotch by its umbilical cord. Oh my fuckedy fuck. Relax, it’s not Cletus, he appears to be safe and sound in his jar.

(I have to thank Melissa for taking me for a romp down this particular rabbit hole, ‘cause she’s dark and twisty too). 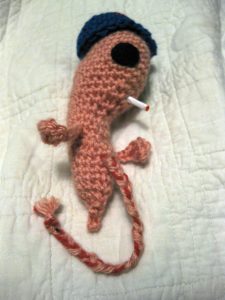 (Cletus is apparently too cool to stay in his jar, he’s gone free range – which is pretty impressive since he doesn’t have legs yet)

If you are looking for some creative stitchery ideas, go check out ravelry for these and other projects:

3 thoughts on “The Twiddle Muff Chronicles”