Home » Words That Make Me Giggle 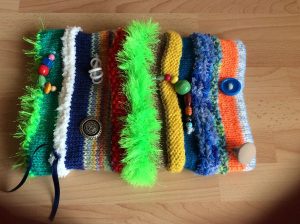 Words That Make Me Giggle

I love words, all kinds of words…but there is a special category of words that simply make me giggle. Often it’s the double entendre, smacking of smutty undertones or sometimes, they just sound silly.

My perennial favorite – labelopes. Unless you deal with Purolator on a regular basis, you have no idea what I’m talking about. Labelopes sounds like a genital reference…what, just me? I don’t think so. Even my driver smirks and giggles if I have to ask him if he has any extra labelopes. In case you’re curious, the official name of the peel and stick clear plastic pouches to put your waybills in for a Purolator shipment is labelope. Now they could have called them pouches or something else, but nope. I would have liked to be at the meeting where they were brain storming what to call those and a guy offered up “labelopes” and the rest said sure, that’ll work (I’m 100% sure this was a man’s idea). Now, I love a good portmanteau (not wine, but I like wine too…and now I’m thirsty) so I get the whole label/envelope mashup, but that guy is probably still sitting back somewhere giggling, can’t believe anyone agreed to use it. Probably same guy who came up with jackelope…he’s a bit of a douche.

The first time I had to ask the driver if he had any of those clear pouches for the waybills, he said “Oh, you mean labelopes?” with a glint in his eye. I had no idea if a) he was serious b) that’s what I wanted or c) I should be having this conversation with him. I make a point of ordering them online so I don’t have to ask for them but the driver still smiles and raises an eyebrow when he drops them off….’cause I know and he knows, you know?

You think I’m making this up – nope, domestic and international:

Cockwaffles…a girlfriend of mine shared this gem with me recently.

I checked the Urban Dictionary (hey I research this shit) and a number of other sources to find out what it is supposed to mean as opposed to what I think it means ‘cause sometimes my own perception interferes with reality. Sometimes. Maybe.

The definitions run the gamut:

1.  profanity (really?) when fuck doesn’t quite capture the moment or you’re looking for something a little more creative or unique
2.  the incapacity for a man to retain an erection
3.  a bi-sexual man whom switches from male to female lovers
4.  a shmuck of the male gender
5.  a man who stops calling you with no explanation (also covered under #4)
6.  standing at a urinal with your business out all ready to go…and you can’t pee
7.  (spoiler alert, this one is particularly strange)…a man’s penis has been inserted into a waffle iron thus making his cock a waffle – usually happens when the man accidentally falls onto the table while making waffles and waffles his own penis (I hate when that happens) or when his wife realizes he’s been a huge douchebag demanding waffles and she clamps his penis in the waffle iron (a bit much but more believable than the self-inflicted version of the story).
8.  And finally, the very literal – a waffle in the shape of a cock. Sounds like a strange breakfast idea..but it does leave me wondering if you can actually buy a cockwaffle iron or if you are forced to pour your batter creatively to pull this one off. Fuck that shit, Eggo should have cockwaffles in the freezer section. I am totally writing to the Eggo people.

And the most recent word – “twiddle muff”. It’s nearly impossible not to smile when you say twiddle muff. Even if you don’t know what it is, it’s a fun word. Now I’m all for having my muff twiddled when the opportunity arises and circumstances permit but, alas, that’s not what it means. It’s so much more innocent than that and even a little bit sad. A twiddle muff is actually a knitted muff (an actual muff, not a euphemism for the female anatomy….’cause what the hell would you do with a knitted vajayjay?) for elderly people dealing with the symptoms of dementia which apparently includes being very fidgety. They are decorated with an assortment of baubles, buttons, etc to give them something to do with their hands to soothe them. 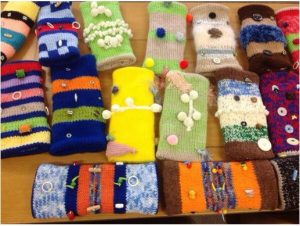 However (I keep telling you, I do my homework), there are knit and crochet vaginas out there… although, I have no idea why. So if your local nursing home puts out the call for twiddle muffs, make sure you are creating the correct muff. While it might be mildly amusing to have a nursing home full of seniors fiddling with knit genitalia, it has the potential to be a little confusing and the grandchildren aren’t going to be allowed to visit nana any more.

Just to clarify, this is a twiddle muff:

these are not twiddle muffs:

(that being said, you are welcome to twiddle them if you so choose but maybe in the privacy of your own home, quite frankly I have no idea what the hell else you would do with them, they are at best strange decor…that is one scary ass cushion)

In the interest of fair play and sexual equality, you can also buy or make knit penises. And I still have no idea why.

I’m always a little surprised and often confused when I google for images for my posts. Googling knit vaginas calls up a host of weird shit that people knit…including, well…shit. Seriously, what’s wrong with people? Why would anyone knit shit? Maybe someone commented on an ugly scarf “you can’t knit shit”….dare accepted. Ok, it makes a point, but a very weird, awkward point. That’s no way to earn your Girl Guides craft badge (pretty sure the knit vagina or penis is also unlikely to qualify for a badge and may get you booted from the troop – but if you were going to leave anyway, may as well make it interesting). 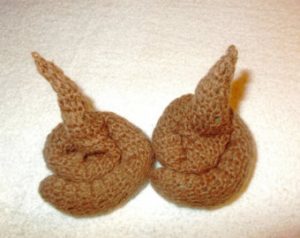 (ps…I’m aware that the shit appears to be crocheted as opposed to knitted, let it go)

are there words that make you giggle? feel free to share them in the comments section