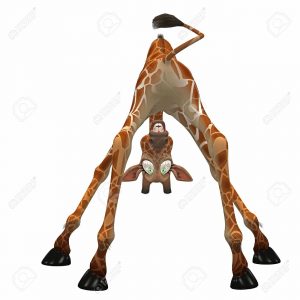 You read that correctly, apparently it’s a thing. It must be, the live feed of a giraffe giving birth in a zoo in upstate New York was pulled off You Tube due to complaints from an animal rights group that it was “sexually explicit and contained nudity”. Seriously, I cannot possibly make this up.  Note:  it’s not the conception folks, it’s the birth.

I have no idea what a giraffe is supposed to be wearing while giving birth but clearly some misguided soul took offense to giraffe nudity. I’m going to say someone needs a new hobby, it’s one of those things you might say out loud to yourself first, think it through. I’m all for the ethical treatment of animals but I don’t think they even make those ridiculous gowns that tie in the back in giraffe sizes. I don’t know if there are stirrups involved, breathing exercises, epidurals…is the father giraffe on standby with a hoof full of cigars, no idea what the protocol is under the circumstances.

So, April, you go ahead and have your calf and I hope it’s as pleasant a delivery as expelling a 6’ tall, 200 pound baby with hooves can be (ouch! go for the epidural, no one’s going to judge you). As long as it’s healthy, right? It’s #4 for you, you got this girl. Pay no attention to the camera tucked up in the corner (the live feed is back online).  There’s no audio feed so if you want to scream, call your partner nasty names and threaten him if he ever touches you again, no one will ever know.  (But, a talking giraffe, how cool would that be?)

Update – this just in, April gave birth this morning (April 15, 2017) after a 16 month pregnancy and 7 weeks of the world watching her every move, Baby G (just throwing that out there, no idea what the calf’s name will be) arrived earlier today…way to go April! 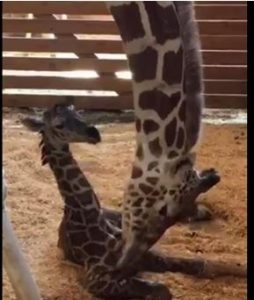 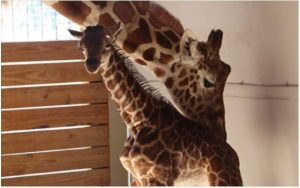