*** Spoiler Alert ***
if you love penguins, turn back now before it’s too late…

I loooove penguins. What’s not to love? There is something uniquely charming about these wondrous, waddling creatures – whether it’s the reality of March of the Penguins or the animated world of Happy Feet. I used to have a poster up in my office of a disheveled penguin with the notation “Fuck it, I’m going home”. Even he had his charms (my boss did not share that opinion).

However, I’ve come across some penguin information that is nothing short of devastating. Research notes for a 1915 publication by Dr. George Levick have been discovered in the London Natural History Museum, including notations that describe my lovable penguins as depraved hooligans. Say it isn’t so, George!

He goes on to describe thousands of “hooligan” male Adelie penguins copulating with each other or dead females, gang-raping injured females and molesting young chicks. What the fk Happy Feet?? Traumatized by his observations, the good doctor stamped his notes on the sexual habits of the penguins as “Not for publication” and cut them from his final book. It was after all 1915, the public was not ready for these revelations.

In a short and frenzied breeding season that lasts only days, frantic single males mate with anything that looks vaguely like a female assuming the position – be it a dead penguin or a rock . Yes, sometimes even a rock becomes the recipient of some loving. Apparently the sex of the target – dead or alive (cue Bon Jovi) – is a bit of a crap shoot, male and female penguins are hard to tell apart, even for penguins. It’s not like the males are in the traditional tux and tails and the females in formal gowns, maybe I’ll give them a pass on that one, who am I to judge?

As for the whole necrophilia thing – given their environment, the bodies of deceased penguins are preserved in good condition, several years passing before they lose their “fresh appearance”.  Theoretically the attraction may be to the position as opposed to hooking up with a corpse.  “A dead penguin lying with its eyes half open is very similar in appearance to a compliant female”. Nothing like that come hither frozen death stare. The bar is set pretty low for this amorous pursuit. There’s clearly not a lot of sexual response expected from the female of the species, her participation would be the same if she was living or several years deceased. Not bad enough to die and have your corpse lay on the frozen landscape for years, your carcass is then at the mercy of a bunch of sex crazed males humping everything in sight in perpetuity. Men of the world, pay attention, for all your complaining about partners who aren’t very responsive in bed, it could be worse, you could be a penguin. If your partner has a pulse, advantage you. If she’s conscious, bonus. Maybe penguins were the inspiration for the term “dead fuck”.

As for the chicks, the males are given the benefit of the doubt on this one – they may simply be collateral damage in the sexual frenzy. Maybe that’s easier than adding pedophile to their list of deviant behaviors. In their blind lust to fornicate the crap out of everything in sight, molesting the chicks is merely a faux pas. What a bunch of assholes.
This information lay dormant in the museum archives for a century, Dr. Levick having opted to protect Edwardian British society at the time from penguin depravity. My penguin illusions have been shattered. I can’t unring this bell. Visions of Happy Feet now tainted with the imagery of packs of marauding testosterone driven male penguins, blinded by the drive to mate, mounting all things mountable. I’m crushed. Hey, Morgan Freeman, narrate the creep factor out of this penguin story line. 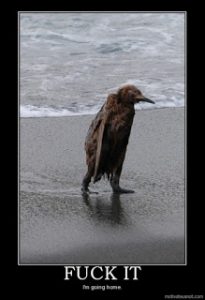