Home » Ripped From the Headlines – Part 2 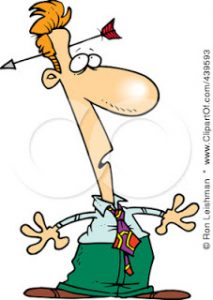 A 35 yr old man in rural Washington was airlifted to hospital after his 15 yr old daughter shot him in the head with a hunting bow and arrow because he took her cell phone away. The kicker – she refused to let him use the cell to call for help and he had to crawl to the neighbour’s house for assistance with the arrow still firmly implanted in his skull. Seriously.

Wonder if he’s regretting the decision to sign her up for those archery classes now? Proud papa cheering loudly while she is presented the award for marksmanship. Should have signed her up for band camp…na, she probably would have beaten him senseless with a tuba or a French horn. Cheerleader camp…would have suffocated him in his sleep with her pom poms. Let’s face it – the kid’s got an attitude problem.

Now, this is not the first teenager to be defiant – no one likes being punished, losing privileges, being grounded. But since when is firing off an arrow at your father’s head the kung fu counter move to losing your cell phone ?? Arming oneself ramps up the defiance level considerably. That takes a special kind of pissed off. Not that there might not be a time and a place for it…maybe someone threatening your family…meeting force with force. I’ll give you that but I think armed response is a little overkill in this particular scenario. I’m guessing dear old dad is going to be a little nervous disciplining this little nightmare in the future – may want to invest in a helmet and a riot shield for the next time he has to tell Princess Pissed Off (Xena’s lesser known cousin) that she’s grounded. Maybe keep the SWAT team on standby.

It certainly never occurred to me to fight back with more than a pout and stamping my feet as I retreated to the bedroom to which I’d been banished when one of my parents had grounded me (cell phones were not an issue in the “way back” machine). I’ve raised two sons to adulthood and where they might have talked back and stood their ground in the face of groundings or having video game systems taken away, pretty sure it never crossed their minds to arm themselves for a full on assault. Or, if it did, they were smart enough to know it would not end well.

I picture my boss turning down my vacation request or telling me I have to work through the weekend. Hhhmmm …I reach down and load my crossbow…I don’t think so, sir… 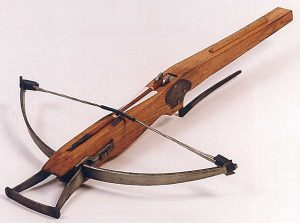