I took a stab at online dating – it was not pretty.

My options for meeting someone are fairly limited – I work for a really small company (no interesting candidates there) and I volunteer with an agency that is 98% women, unless I’m considering making a major lifestyle change…I don’t do the bar scene or casinos…this is beginning to sound a little pathetic.

So, I took the plunge into online dating, what’s the worst that can happen? I’m sure most of the online sites are the same so I won’t point any fingers…but there may have been some ‘fishing’ involved.

1st nibble: Message from a guy who is looking for a fun, fit, classy lady. Has he actually read my profile? I tried to discourage him politely, I’m new at this. I responded: “Thanks for your interest but, having read your profile, I’m not sure we are on the same page, good luck in your search”.
His response – he thinks I should spend a day on his boat. Let’s review the clues – I don’t know him, we’ve never spoken, never met but he wants me to spend the day on his boat. I’m not sure about my swimming skills but I’m thinking being a captive audience on a boat with a stranger is not in my best interests. Call me skittish.

So, I took it up a notch: You are looking for a fun, fit, classy lady – allow me to clarify. I can have fun doing just about anything and stuff others would not find nearly so amusing. I am physically active and working on the fit part, but I am not there yet (a ‘work in progress’ at best). As for classy – the voices of everyone I have ever known are laughing in the back of my head. It’s not the first word that comes to mind when describing myself (it’s not the second or third either). I can pull off classy only under duress and for really, really short periods of time but it’s not a regular feature and it will come unraveled without warning.

Incredibly, he still thinks we should do coffee. Against my better judgement, I decide to make this a practise meet – dip my toe in the water. He knows only my first name, does not know where I live and we are going to meet there…safe enough. Public place, I’ve got my car. No pressure ’cause I’m predicting this will fall flat. There is a line in my profile that reads “I am not impressed by shiny cars, boats, motorcycles, etc.” Buddy spends an hour and a half talking about his boat. This is not my soul mate. His interests include fiddle head greens and trout. I kid you not. Next.

2nd nibble: Long haired, hippy character from the Beaches in downtown Toronto. We message back and forth for several days. He is intelligent with a quiet sense of humor, well read. Describes himself as a better listener than a talker (remember this; it’s going to be important in a minute). We spoke on the phone a couple of times, decide to meet at a park on Lake Ontario and go hiking the trails for the afternoon. Maybe, in person, he will be a little more talkative. We hiked for 3 and a half hours over every single inch of trails in the area with a grand total of maybe, maybe 15 minutes of conversation. That’s a generous estimate and it wasn’t all in a row. I, because I know me, made a point of not filling all the silences; I don’t want to be single handedly responsible for all the conversation. After one particularly long stretch of silence, I turned to him and said “Are you always this talkative?” He smiled shyly and said “Ya, I get that a lot, want I should shut up and let you get a word in?”. I e-mailed him back the next day and told him I thought he was sweet but that my life would swallow him whole.

3rd nibble: Earl from Orangeville – way too involved with his cat.

4th nibble: George – Newfie#1 – some blinky issue that, I’m sorry, but really distracting and his answer to everything was “well…there you go” – a little shy of stimulating conversation. George, there you go…just go…seriously go. Next.

5th nibble: 53 yr old Newfie #2 spewing psychological, metaphysical, quantum physics, parapsychological, spiritual “stuff”, quite convinced that if he could just get a few minutes with the Dalai Lama, he could make his argument that somehow he personally holds the key to the universe and would be more than willing to release these truths and the photographic evidence contained in a picture of his dearly departed quadriplegic friend thereof to the Dalai himself, lives temporarily with his sister, has just discovered that the insurance was cancelled on his pick up and his current dilemma is when to quit working and head for NFLD to stay with his mother (have I mentioned 53??) and time that with the interruption in his income while the annual EI kicks in. Conversation will revolve around topics such as synchronicity, numerology, duality and his intertwined opinions on matters that will make absolutely no fkg sense whatsoever.

Seriously. I shit you not. Nuttier than a fruit cake stuffed full of squirrel poo.

He asked me what the chances were of seeing me again…uuummm. I bolted (I’m not proud of that…well, maybe a little). I rushed home and sent him a quick note explaining that while I found him interesting (okay, that’s a stretch), he’s a man clearly on a mission which I would never share with him. The faster he gets back to the mother ship, the better.

Of course, those are just the ones I’ve met. There have been a few other characters along the way who didn’t make it past an IM or two. There has been a recurring theme of height – most of the exchanges have been with tall men (insert your own vertically challenged joke here since 5’3” qualifies as taller than me, but seriously, 6’+). I was going to post a picture of myself beside an amusement park sign that read “you must be this tall for this ride”. One character emailed me a few times, we IM’d a couple of times, 6’4” tradesman. He asked for my cell#, seems reasonably safe. Two minutes later, he sends a picture to my cell while we are msn’ing with webcam. Imagine my surprise…a very erect penis. How naïve am I?  Never saw it coming. Wait, just reread that. Technically, he did ask if I’d like to watch him self amuse to the inevitable climax. Geez thanks…I appreciate the offer but count me out. Hey, wait a minute, that’s what you’ve been working on while we were IM’ng…explains the slow response…one handed typing slows a man down. Impressive, I’ll give him that but there had been no conversation around nude pics.

He asked for a pussy pic in return. The next day he got one – a spread eagle pussy shot. Not what he was looking for … who knew? The cat had posed perfectly – laid back, legs spread. He was fishing for a shaved pussy shot but I’m reasonably sure that Tigger was not up for that without some serious blood shed (mine). I will give him credit for a massive penis, in fact it was a little terrifying – settled the age old question about proportionality. Opted not to meet him. Next. 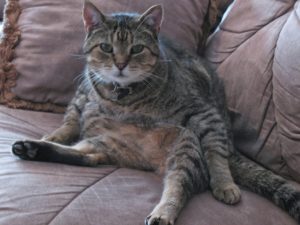 One of the guys who contacted me was a nudist …gotta check my profile, what made him think we’d be compatible? I was bored, so we chatted online for a few min, he asks if we can go on web cam (note to self: how bored do you have to be to let this happen?). Told him I was not going to turn on my webcam, he opted to turn his on. You see where I am going with this?? He had mentioned he was a nudist, so maybe a shot of him sitting at his desk sans shirt. Nope, camera comes up and he’s standing there stark naked – full frontal, then does a full 360 and asks me what I think. I think he’s nuts, seriously, certifiably nuts. I’m not a prude, but a little warning would have gone a long way to prevent that little incident. Next.

At this point, I’ve spent enough time perusing dating profiles that I’ve decided to offer my “expert” opinion on self-marketing in the world of online dating. First stop – the picture. What not to do:

Nice fish, we get it, you like to fish. That being said, women don’t give a rat’s ass about your fish. Fishing is what you do with your buddies, fishing is what you do in lieu of a relationship, fishing is a guys weekend. If you are marketing yourself to women in a visual medium, you might want to rethink your profile picture. (Would have liked to arrange these pictures nicely but you don’t want to know how long it took to accomplish this random arrangement). Note to dude in the red shirt – the error is compounded by posing with a fish and a woman…I don’t care if she’s your friend, your sister, your neighbor (ex wife or girlfriend)…no women in your profile picture, we don’t like it.

If your profile picture includes something you’ve killed, we don’t like that either. Look at me, speaking for the entire female gender – I’ve taken an informal poll and we concur, no carcasses. You think I’m kidding…

I know it can be challenging to take a decent “selfie”, I get it. If you can’t manage with a camera, web cam or phone – you must have one friend who can assist. I know this because a friend’s profile pics were crap and I helped him (the new girlfriend is a bit of a bitch but I’m not responsible for that, I just polished up the bait…catch and release my friend, catch and release). And if, by some chance you manage a suitable picture, would it be asking too much for you to rotate it…

I’ll wrap this up with some random wtf…

You, sir, have a mullet.  That is never, never good form.

Excuse me, what’s the nature of your relationship with your dog?  Just asking…

You appear to have underwear on your head.  Frilly pink underwear that may or may not be yours…not judging, not even curious.

For the record – if you refer to yourself as “witty and cleaver”, you’re not…same goes for “intelagent”. If your profile includes the line “looking for a woman who can be sane, rational and logical – at least most days of the month”…we took a poll on that one too and you are never getting laid again.

If you have ever taken a foray into the world of online dating, you know what I mean. If you haven’t, consider yourself warned. I’m told the women are as bad as the men – yay for gender equality. Good luck to anyone who’s navigating the world of online dating, let me know how it turns out (and always, always be prepared with a good pussy picture). 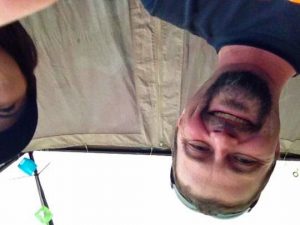