Home » Ripped From The Headlines 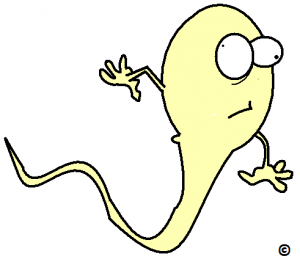 Have you ever read a headline and wondered wtf?? Came across a whopper:

Ummmm…seriously?? I shit you not. Gotta say, as headlines go, it got my attention. Some character in California has been fined (and I am assume fired) for ejaculating into a co-workers water bottle. Buddy needs a new hobby.

I find myself wondering how the detective work played out on that particular investigation. The board room meeting where police are asking for DNA swabs from all male employees. Hmmmmm … are you trying to solve a murder, espionage, some white collar crime?? Nope … just sorting out who’s jacking off in Sally’s water bottle.

Under what circumstances does it occur to someone to jack off in a co-worker’s water bottle? Is this some frustrated Romeo who’s tired of her turning down his sexual advances, no “office” hummer”…well, guess what?? It’s a rather devious way to get Sally to swallow some of your swimmers. If she wasn’t interested before the water bottle incident, I doubt this is going to sway her opinion in his favour. Was he that pissed off at the office snob that it was twisted payback?  Under what plan of action does this seem like a good idea? I’ve got a pretty dark and twisty side but I just can’t wrap my head around this at all – I, of course, do not have a penis but I still can’t picture any scenario, any extreme of anger or rejection that would inspire one to spank the monkey into a co-worker’s water bottle.  Full disclosure – I did work with someone who got back at his male supervisor by rubbing his junk all over the guy’s keys…and I’m just going to leave that right there.

The victim of this particularly nasty plot is now going to be compensated for loss of wages, therapy and medical expenses.  What the hell kind of therapy is suggested for this trauma?? She drank from the bottle on both occasions – the first time she detected a foul taste (uumm…ewww) and disposed of it (poor thing would never have guessed what the secret ingredient was), the second time she suspected something was up and sent it to a lab for testing.

It took a DNA match to discover the culprit which tells me he didn’t bother coming clean right around the time everyone is required to submit to a cheek swab. Perhaps he thought, given enough time, he could come up with an innocent / logical explanation for how his ejaculate wound up in the suspect water bottle. Even in the darkest recesses of my mind, I cannot conjure up an explanation that doesn’t involve him having jacked off in the bottle. Strangely enough, men are expected to exercise some control over where their swimmers end up and there’s not one rational explanation I can imagine where he could claim innocence here – they don’t sneak out undetected and wander about the room.

I’d like to be a fly in the room when Mr. Charming interviews for his next job – can you tell me why you left your last job? They frowned upon me cumming in a co-worker’s beverage container…go figure, the epitome of uptight corporate management …picky, picky, picky. There were no actual rules concerning said act, it did not come up during the employee orientation. You know those peculiar rules that you come across and you can’t possibly fathom how they came about except that you know that somewhere along the line somebody did the very stupid thing that necessitated the rule…licking batteries, sticking a finger in the paper shredder, standing on the roof hugging the antenna during a lightning storm.  It’s all about liability, isn’t it? The update to the New Employee Manual should be hysterical – rule# 16 – Employees are not permitted to share ejaculate with co-workers without their knowledge and consent – no jacking off in anyone’s water bottle.

As my dark and twisty side is mining this story for every last bit of ridiculous, the morning news team in the background offers up today’s poll question: “Are people in the workplace becoming increasingly rude?” Sally votes yes…and no one, I repeat no one has a better case….