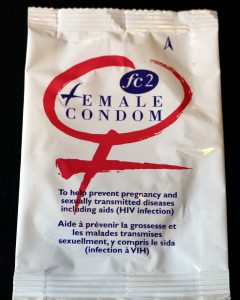 I recently had the opportunity to have a hands on look at the female condom. I’ve heard about them but I’ve never actually seen one. From the descriptions I’ve heard, they seem impractical at best, but here was a chance to do some in depth research. It, of course, comes with full instructions. Let me tell you, if I was capable of the physical contortions and manual dexterity required to properly insert the female condom,I would need neither the condom nor a man. I think maybe you’re going to need a couple of practise tries to get this right

According to a website, it can be placed prior to intercourse – going to feel extra sexy walking around with a bag and ring hanging outside my vajayjay. Websites vary with this one, anywhere from 20 min to a few hours. “Women can insert the FC2 in advance of the sex act. This allows for a more spontaneous act because an erection is not needed to insert the FC2” (I’m going to suggest a little “heads up” with this approach might be required, that’s a hell of a surprise to run into if you’re not expecting it).

It is described as a solution if your male partner refuses to wear a condom. If he’s not willing to wear a condom, what are the odds that he’s up for intercourse with a female wearing this ridiculous apparatus?

I may be going out on a limb here but the most effective aspect of the FC2 for birth control would be its ability to deflate an erection. There’s not a male I know who would be sporting wood dealing with that. Somewhere between the laughter and the wtf factor, it’s got to be an erection killer. Maybe someone who’s just gotten out of prison; hasn’t been in close contact with a female in 10 to 20 years…maybe he can overlook that. He’s likely not gotten laid (at least consensually) in a while. A slimy bag and a hula hoop hanging out of the target might not deter him. At best, that’s a limited target consumer group. And I do mean slimy, lubrication yes…but holy crap.

If you’re into oral foreplay (and who isn’t)…this contraption is likely to interfere with access to the bits. I’ve done some hands on research in this area. Relax, this will not be an overshare. First, the ring should hang 1” outside the vagina…that’s attractive. Then there’s the diameter factor – I’ve tried to recreate how this would work. It required my son’s confused cooperation (note: not that kind of cooperation, we are close but not creepy, backwoods close, there is no banjo music playing in the background) – someone had to hold the measuring tape. Of all the weird shit I’ve asked my son to help with over the years, this has got to be right up there. He came upstairs while I was sitting there with a fistful of condom, a camera and a measuring tape –

“I need your help with this”

“No, no…just hold the measuring tape in position for the picture”

The ring diameter is 3”…that’s huge! Definitely going to interfere with access to at least one spot that needs…accessing.

Note: I recreated the appearance of an inserted FC2 with my fist ‘cause I wasn’t the least bit interested in spending $113 plus tax for the handy dandy vagina model for demonstrating the insertion of the condom. And that price doesn’t even include any condoms. It would be amusing to order it and have it shipped to work, but not $113 amusing. 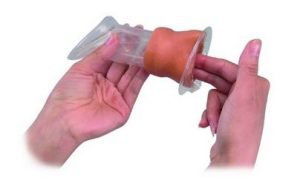 The female condom is not an impulse buy…I’ve done the leg work, checked in at 3 local drug stores, not available on the shelf. They have to be ordered online and it takes a couple of weeks to get them. Clearly not a popular product, not readily available. So technically, yes, there is a female condom on the market, but you’re going to have to plan ahead – this is not something you can pick up on the way to a spontaneous bootie call.

One site suggests that a woman can urinate with the FC2 in place…really? I am personally very familiar with the female anatomy and I envision that as a very messy, splashy situation…a built in shower head for the ultimate golden shower (for the record, that’s a fetish I cannot wrap my head around, if you pee on me, we are not having sex…ever).  And how do you clean up after that…or you just maintain a layer of urine between the condom and yourself – that seems entirely unsanitary.

When googling to track down the website where I read that particular gem, I came across the following – you know how google predicts your search – this is what google predicted for me: can a pregnant woman urinate in a policeman’s helmet.  Google, wtf, not even close.  For example, a pregnant woman can legally relieve herself anywhere she wants – even in a policeman’s hat. It is apparently legal for a male to urinate in public, as long it is on the rear wheel of his motor vehicle and his right hand is on the vehicle.Jul 2, 2010 – nope google, that’s not what I was looking for, that’s even weirder that what I was googling and I don’t even want to know where it’s legal for a pregnant woman to urinate in a policeman’s hat (and is her being pregnant an important detail?). How do you pull off that particular maneuver…excuse me officer…can I have your hat for a minute? Oh, wait a minute, here’s a clarification “A pregnant woman may request to urinate in a police offer’s helmet, but he is probably not going to oblige.” Asshole. Apparently there are some intricacies in urinary law…there are urinary laws?? This is just getting worse by the minute.

After an extensive survey…okay, I talked to 3 male friends…the consensus is that the female slip ‘n’ slide is a no go. Reactions varied from confusion to horror and no one thought they would be able to insert tab A into slot B under the circumstances.  A good friend tells me that he envisions everything coming to a screeching halt.  I can’t get the phrase “like a frightened turtle” out of my head.

In the name of research, I’ve managed creeping out my son, getting plastered in lube and confusing the cat (hey Jax, that’s what you get for interrupting a photo shoot).  I think my work here is done. 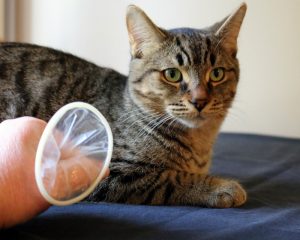 4 thoughts on “The Female Condom”