Home » Ode To Mary Roach (aka: the strange crossroads of sex and science)

you can put lipstick on a pig…but can you make it orgasm…yup, we’re going there

Spoiler alert…this is not a post about kink. Each to their own and stuff, not judging but that’s not where I’m going with this. I’m a huge fan of TED Talks, probably to the level of addiction, I can’t watch just one. I recently watched Mary Roach’s TED Talk “Ten Things You Didn’t Know About Orgasm”…I cannot recommend it highly enough. Usually inspiring and thought provoking, this one is pure wenchery gold.

I pride myself on being fairly knowledgeable, but I learned some new words and terminology. For example, the upsuck – cervically, not orally – we’re not talking hummers here. But, I’m skipping ahead a bit.

Things I learned from Mary Roach:

1. You do not need genitals to have an orgasm – don’t get me wrong, they come in handy but aren’t an absolute necessity. I have no idea what to do with that information.

2. Study at Rutger’s University identified a woman who can think herself to orgasm – no other stimulation required, and it only takes her about a minute to get there. Fuck kegels, I want what she’s having.

3. You don’t actually have to be alive to have an orgasm…take a minute with this one; you can have them when you’re dead. Brain dead and on life support mind you, but dead all the same…like an organ donor. Bonus points for organ donors but you’re not likely going to appreciate it nearly as much.

Now, about that whole upsuck thing. There was a theory that an orgasm could improve fertility as the contractions may cause the cervix to dip down into the ejaculate deposited in the vaginal canal and draw it up into the uterus – upsuck. Plausible. However, the research was done and apparently not so much. Kudos to the females who offered up their services to an experimental procedure that involved artificial semen – for which there is a recipe (take that Martha Stewart).

But, not so fast – apparently sexual stimulation does have a measurable impact on porcine reproduction. The Danish National Committee for Pig Production (of DNCFPP for short) has determined that sexually stimulating a pig during artificial insemination increases the number of piglets produced. What the hell is going on over there in Denmark? Good information for pig farmers but at what point did this come up in conversation? Were Sven and Bjorn just sitting around in the barn one day when one says to the other “I wonder what would happen if we got old Birte’s motor running while shooting her full of boar juice?” (and yes, I had to google for a Danish girl’s name, trying to stay as authentic as possible here). Are there some weird bragging rights involved if your amped up insemination efforts result in more piglets? Throw that on your resume.

On a list of weird shit you can get paid to do, sexually stimulating a pig while artificially inseminating her has to be waaaay near the top. How do you even apply for this kind of work? What are the qualifications? A deep-seated appreciation for farm animals? (wandering into bestiality territory here). At a dinner party when the conversation rolls around to what you do for a living, exactly how do you explain this? When your child asks you what you did at work today…oh man, you are going to be a hit at career day at school. You better really enjoy it too ‘cause you are never, NEVER going to get asked back. Pretty sure that presentation will get you a life time ban from the property (and permanent revocation of your PTA membership)…but totally worth it!

A girlfriend of mine has suggested a fun activity for our next wine night…we are going to create an online dating profile for a fictitious male whose occupation will be porcine inseminator. We have a few theories about how a woman might react to that particular occupation but in the interest of scientific validity, let’s call this research. There might actually be women who are at the very least intrigued…and that scares me more than a little.

In order to determine what sexually stimulates a pig I’m guessing one has to observe a lot of pig sex – more weird job requirements. Should you be buying her some flowers first, whisper sweet nothings in her ear? According to Mary, it’s difficult to gauge an animal’s sexual reaction – not a lot of clues here. No oooohhhhing and aaahhhhing, no “ya baby, right there”, no “harder, faster, deeper”. What did you do at work today daddy? I watched a whole lot of pig sex. Maybe go with I observed porcine fornication, sounds little more legitimate and maybe a little less scarring. On a side note, the pig’s clitoris is inside the vagina…in case you were wondering.

I dedicate this post to Mary Roach for one of the most unique, original TedTalks I have ever watched. If you want to view Mary’s TedTalk (and I highly recommend it), I’m providing the link here:

If you want to get right to the pig stimulation section, skip ahead to the 11 min mark – but you’re going to miss a lot of good stuff along the way.

Follow up the TEDTalk with her book Bonk: The Curious Coupling of Science and Sex…I seriously love this woman, she’s my new hero. She takes research for her writing to an epic level, how to take one for the greater good! Click on the link below the picture and it will take you straight to it…full disclosure, if you purchase it through this link, I may receive a commission, I have no idea how this works, it’s my first shot at this in my efforts to become a full time wench as opposed to a part time wench. 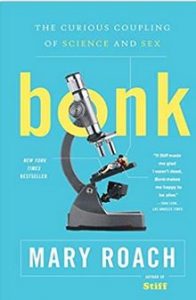 I tweeted this post out to Mary Roach…and she liked it!!

2 thoughts on “Ode To Mary Roach (aka: the strange crossroads of sex and science)”