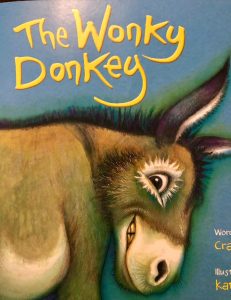 I ordered The Wonky Donkey for my granddaughter’s 2nd birthday. I ordered other stuff too, I’m not cheap, but one of the things I ordered was a copy of this much loved children’s book – it’s a funny, silly rhyming book, kids love that stuff. There was a youtube video out a few years ago of a Scottish granny reading it that went viral.

It arrived and I set it aside. Last night, I decided to have a quick look at it, see if it was fun to read. Before anyone gets their undies in a bunch, let me say – the story is cute and it’s a fun read. Kids love rhyming stuff and this book hits the mark square on. I’ve watched the Scottish granny video and it’s awesome. The story is all kinds of kids fun cute.

If you love the Wonky Donkey, stop right here and turn back, I don’t want to ruin it for you. This is the only warning you’re going to get. I wanted to love the book, I really did…but alas, it was not to be.

I got into the second verse when I was immediately horrified by the illustration. I have no issue with the donkey having one eye, that’s kind of his thing, he’s got a laundry list of issues. That being said, the illustration shows a bird (that looks like a miniature version of Sesame Street’s Big Bird) having just plucked out the donkey’s eye. The cheerful little bird is holding the eye in such a way that it appears to be looking right back at the donkey from whose head it’s been removed…and the donkey is grinning!! WTF? 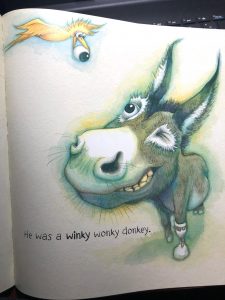 Three pages later…problem #2. At first glance, the donkey appears to have a huge, gaping hole in his head where the eye once was. Seriously, this is the stuff of nightmares. I took a closer look and it appears it might be a poorly drawn eye patch but you have to take a pretty close look to see that. It looks like a huge decomposing hole in its head. Not cool, Scholastic, not cool at all.

Of a more minor concern is that the donkey is referred to as smelling really bad which morphs into the rhyme that he was “stinky-dinky”…was that necessary? Could we not just have gone with stinky or maybe stinky stanky – you’re going to have a bunch of kids giggling about the donkey having a stinky dinky. In that same illustration the donkey has farted on the bird causing it to fall to the ground in a toxic cloud, that’s karma you fucking jerk…you plucked out his eye.

This book is 12 years old…and from Scholastic no less, has no one noticed there’s a problem with the illustrations? I know I see the world through a dark and twisty lens but still, something is wrong here. I ran it by a couple of friends and they had the same reaction. Granted, my friends tend to run dark and twisty cause, let’s face it, they are my friends.

There’s a verse where he’s referenced as not having had any coffee yet and he’s cranky. The picture looks like something off a horror movie poster, seriously disturbing, the stuff of nightmares. It’s only the top half of the donkey’s face sort of disembodied with the gaping hole where his eye once was and he’s looking rather murderous. The bird looks terrified and with good reason – you plucked his fucking eye out, anything that happens to you from here on in is on you. In fact, why are you still hanging around, are you after his remaining eye? 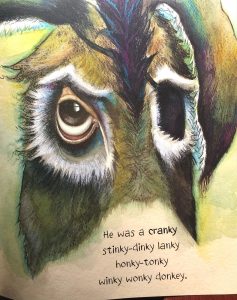 I cannot possibly be the only one seeing this, time to do some research. All I can find is glowing reviews of the book. How is no one else seeing this? I finally came across a youtube video featuring a young woman who goes by the moniker The Trippy Hippie – check it out, it’s called “Reading The Wonky Donkey with Tourettes Syndrome”. Just to clarify, the Trippy Hippie has tourettes, not the Wonky Donky, he’s got entirely enough problems of his own. As soon as she turns to the page with the verse about the missing eye, a look of horror comes across her face and she says “what the fuck, the bird’s took his eye”. Finally, someone else gets it. Creepy as fuck. She goes on to call the bird a bastard. I’m totally with you girl.

She gets to the page where he’s cranky…the disembodied floating half head picture, turns the book at a couple of different angles and asks “is that supposed to be his empty eye socket?” Her mother, off camera, says “I think so, yes”. She then says “is this definitely a children’s book?” Confirmation, it’s not just me.

At the end of the video she goes back to the illustration of the bird having plucked out the donkey’s eye and says “that’s quite upsetting”. I’ve had no influence on her or her mother’s opinion at all, they arrived at the same conclusion with no input from me whatsoever. And the kicker, she never even introduces a poorly drawn eye patch as a possibility. I will say her Hee Haws are nothing short of epic. It was totally worth watching for that alone.

I wanted to reach out to her to thank her for her observations, I tried twitter but the trippy hippie on twitter is taking a whole different herbal inspired trip. I found her on Instagram.

I did have someone on twitter speculate that rather than the bird having plucked the eye out, he saw it as the bird bringing him a glass eye. But, the donkey does not have an eye in any of the following illustrations – he either has a gaping hole or a very poorly drawn eye patch. The delivery of a glass eye theory holds no water at all.

I took one last shot at clarifying what was going on with the eye and I watched The Wonky Donkey Song on youtube…in the interests of covering all the research bases. In fact, I watched it from two different sources because one was referred to as “unofficial”…spoiler alert, it was the exact same video. And it just made things worse. The donkey has two eyes in the first verse and into the second verse, then suddenly has only one and the bird is flying away with the missing one and tucking it into his nest. How is that not strange? From one frame to the next, the eye is simply gone from the socket and the bird’s got it. That bird is an asshole.

I showed the illustrations to my son when he got home with no pre-amble. Just take a look at this picture in a children’s book. He took a moment and then said “the bird plucked the eye out…in a children’s book?” Thank you!! I then showed him the picture of the gaping hole and he got there on his own as well.

Guess what my granddaughter is not getting for her birthday?

Just so that I’ve not left you scarred for life, going to close this post out sharing the Scottish granny reading The Wonky Donkey, you get all the silliness of the book with a Scottish accent kicker and none of the images from the book.

8 thoughts on “The Wonky WTF Donkey”