Home » Coffee Enemas…how do you take your coffee? 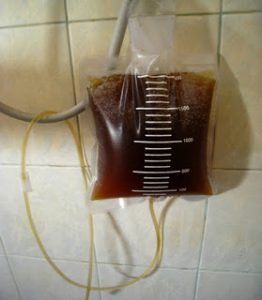 Coffee Enemas…how do you take your coffee?

(for the record, orally…I take mine orally)

Coffee enema…this is a thing?? Color me surprised. My son was watching an episode of My Strange Addiction and shares this little gem with me. Not only is a coffee enema a thing, it’s a thing that can become addictive. Oh, do tell.

Gotta google that one, where else would one find a wealth of information on strange shit that people do? Sure enough, I get as far as “coffee e” and google knows exactly that I’m looking for –

quite frankly, that’s a little disturbing. (note to self: remember to eradicate the browsing history on the computer when I’m done or no one is ever going to offer me a coffee again without giggling).

The first website gets directly to the question at hand – “Why in the world would someone take coffee in an enema?” Or as the voices in my head are demanding – WTF?? Among a long list of the benefits of said method of consuming caffeine, it claims to “Help with depression, confusion and general nervous tension”. Ummmm…I’m not sure at what point in a depressive episode it would occur to someone to fire up a coffee enema. As for confusion, the concept of a coffee enema confuses the crap out of me and nervous tension…I’d be some nervous about lubing up my rectum for my morning cup of joe.

It goes on to list increased mental clarity, improved energy levels, increased joy and happiness and reduction in anger among the virtues of the practise. Hey, guess what…it has the exact same effect if you consume it orally and it’s pretty tasty, too.  It refers to the procedure as “somewhat inconvenient”…ya think…enema bag vs coffee mug, you do the math on that one. Better yet “able to be done in the privacy of your home”. Okay, I’m on board with that particular piece of advice; in fact, I highly recommend you consume your coffee anally in the privacy of your own home. Of all the things that will get you banned from your neighborhood coffee shop, I’m willing to bet a coffee enema would do it every single time.

The list of apparatus required includes an enema bag or bucket…I had no idea there was such a thing as an enema bucket – that sounds like a lot of coffee (perhaps I’ve led a sheltered life). While most practitioners recommend inserting a lubed up enema tip in the rectum, for a more thorough procedure it is suggested to first insert a 30” colon tube and then attach the enema tip. Ummm…as if the whole procedure is not weirdly invasive enough …yikes.

I’m still pretty confused about this practise, sounds like a drunken party dare to me. The therapeutic recommendations for this procedure are that it be “repeated at least daily and up to three times daily for at least several years”. The doctor who pioneered the use of coffee enemas for cancer patients insisted on a schedule of 6 times a day, every 4 hours, for at least 2 years. Who the hell has got that kind of time? Six times a day, every 4 hours? If you hate being woken in the middle of the night in the hospital by a nurse checking your vitals, you are really not going to like this particular sleep disruption.

There are historical references to the practise of enemas, dating back to biblical times in the Dead Sea Scrolls…according to whose translation? Enemas as one of the healing miracles of Jesus…seriously? Something about seeking a large trailing gourd having a stalk the length of a man…suffering the end of the stalk to enter your hinder parts…nope. Not even if Jesus thinks it’s a good idea. Jamming a gourd stalk the length of a man up my butt is far more suffering than I’d be willing to consider. It does go on to say that, to the best of the author’s knowledge, Jesus did not recommend adding coffee to the cleansing water. Thanks for the clarification. Praise be.

For all the miraculous claims of the proponents of the coffee enema, I can’t help but wonder under what circumstances the first coffee enema happened. One account claims that a nurse in WWI accidentally dumped coffee in an enema bag for a soldier who was constipated as a result of anesthesia drugs and he reported being in less pain…thus, the coffee enema was born. Guessing it was a pot of cold coffee…I’ve had a scorched tongue from hot coffee, thinking a coffee scorched rectum would be considerably worse.

There’s been some research done with mice…that must be a shock to the poor little mouse. Of all the unnatural circumstances these rodents are exposed to in the name of science, this would be pretty bizarre (and where do you get a mouse size enema kit?). As for the research done on human subjects, I wonder how that project was presented. I’ve gone to university and was required, as part of my psychology credits, to partake in some research projects. I hope anyone opting to show up for this particular gem read the fine print ahead of time…if they signed up for the opportunity to participate in research examining the effects of caffeine consumption, the method of intake would have come as an unpleasant surprise.

There are some helpful suggestions like – do not get up and walk around while holding the enema in your bowels…no shit Sherlock. Use plenty of petroleum jelly (or shaving cream?) to lubricate the enema tip…check. A darker roast is somewhat more difficult to retain than a light roast…I don’t even want to know why. Using a little blackstrap molasses in the enema to help retain it, adding crushed garlic as a chemical mechanism to help dislodge yeast organisms…this all adds up to the world’s worse smoothie…no wonder you’d have to shove it up your ass, you sure as hell couldn’t stomach drinking it. Coffee, black strap molasses and crushed garlic…mmmmmm.

It goes on about the benefits of hydration and describes most people as quite dehydrated today. Not to be repetitive but I cannot stress this enough…water and coffee consumed orally have the same effect…providing hydration and increasing mental alertness…with the added benefit of being a much simpler and more pleasing way to consume both.

I know some coffee places offer discounts and customer loyalty rewards for bringing in your own cup to fill up in the interest of reducing the use of disposable cups. Pretty sure the helpful little barista at the local coffee shop is going to be more than a little horrified if a customer offers up his or her enema bag/bucket for a refill. I doubt they have a button on the till for that option and I guarantee you they don’t pay her enough to touch enema paraphernalia.

In research for this blog post, I’ve come across references to urine enemas, absinthe enemas, yogurt enemas…apparently there’s no limit to the list of things someone, somewhere has opted to intake anally.

I’m fairly adventurous and usually quite open to new experiences but it has to be said…not once, when asked how I take my coffee, have I ever answered “up my ass – please”. For the record, I take my coffee with milk…in a mug… always, always, always in a mug…orally…always orally. If I’m going to jazz up my coffee experience, I’ll throw in some Bailey’s or Kahlua. 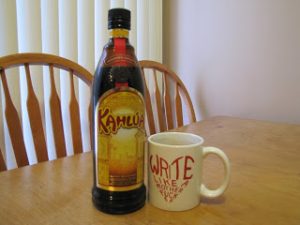 2 thoughts on “Coffee Enemas…how do you take your coffee?”